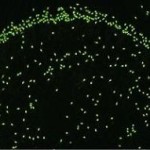 ScienceDaily (May 31, 2010) — Researchers at Yale School of Medicine have discovered a method to select sperm with the highest DNA integrity in a bid to improve male fertility. The method is comparable to that of the egg’s natural selection abilities, according to the study published in the June/July issue of the Journal of Andrology.

“Our results could help address the fact that approximately 40 percent of infertility cases can be traced to male infertility,” said the senior author of the study, Gabor Huszar, M.D., director of the Sperm Physiology Lab and senior research scientist in the Department of Obstetrics, Gynecology & Reproductive Sciences at Yale.

Huszar said that past semen analysis focused on sperm concentration and motility. It was assumed that if a man had a high sperm count and active sperm, that he was fertile. But there was no information on the sperm’s fertility or its ability to attach to its mark, the female gamete. In an ideal case, the egg naturally selects the optimal sperm, but during in-vitro fertilization treatment of men who had only a few sperm, clinicians did not know whether they were injecting the correct sperm into the egg for fertilization. “We have now found a biochemical marker of sperm fertility so that we can select sperm with high genetic integrity,” Huszar said.

“The sperm with fragmented DNA work like scratched CDs,” Huszar said. “They seem to be operational, but when you play them, some of the information is missing. These damaged sperm may also carry chromosomal aberrations that could be related to genetic diseases.” Huszar and his colleagues identified the nuclear and cytoplasmic attributes of various sperm. They also identified a key relationship between the ability of sperm to bind to hyaluronic acid and between high sperm genetic integrity, which enhances the sperm’s contribution to normal embryo development.

“When sperm is selected with hyaluronic acid binding, they are of comparable, if not better, overall quality than sperm chosen by the oocyte in the natural fertilization process,” said Huszar.

Disclaimer: This article is not intended to provide medical advice, diagnosis or treatment. Views expressed here do not necessarily reflect those of ScienceDaily or its staff.

Your shopping cart is empty
Visit the shop